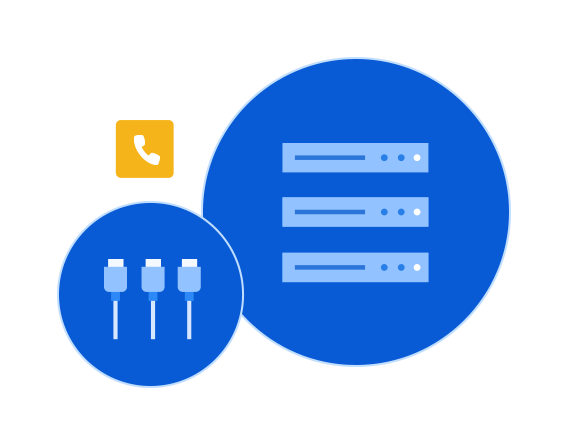 When it comes to business communications, the terms PBX and VoIP seem to cause a lot of confusion. Too many articles treat these two things as if they are the opposite of one another. That’s not quite true.

What do you think when you see the phrase, VoIP vs PBX? You may think that they are a binary choice, and two different types of communications.

Let’s clear up the confusion. Here, we’re going to provide an easy-to-understand definition of both terms, then explore how they are actually related.

PBX stands for Private Branch Exchange, a business phone system that connects office desk phones within the same network. It allows employees within a company to make calls to one another and to transfer calls for free. With a PBX phone system, a business can have multiple phones sharing fewer lines. That’s because rather than using physical phone lines, extensions are used to redirect phone calls to the intended receiver.

Traditional PBX connects to physical phone lines through dedicated hardware devices, so that the voice network and data network within a company are completely independent. With the introduction of IP telephony and the trend of ISDN & PSTN switch-off, analog phone systems are becoming obsolete.

VoIP is an acronym for voice-over-internet protocol. It’s simply a technology used to transmit voice data via an internet connection. A VoIP phone system takes your voice, turns it into file data, compresses those files, and then converts those files into packets of data. All of this happens in real-time. It’s virtually instantaneous. These packets are sent over the internet to a VoIP provider. The provider converts them back and sends them to the other phone.

Even though many things are happening during this process, a VoIP call is just as fast as an analog call.

People who were around when this technology emerged may be suspicious of it. Initially, VoIP providers had a difficult time successfully completing even a low level of service. That’s changed today. The sound quality of VoIP might be affected by the bandwidth and the device used. However, most VoIP providers now offer various different protocols and codecs to ensure HD audio quality.

A VoIP solution can also work fine for businesses of many sizes, not matter small and medium-sized companies or large enterprises. Read through to check out additional benefits of VoIP PBX systems.

So What is VoIP PBX?

VoIP (Voice over Internet Protocol) PBX (Private Branch Exchange) is a phone system that works similarly to standard PBX. The difference is that it makes use of a wide area network or local area network instead of the traditional switched networks used in older public switched telephone networks (PSTN) systems. It is also known as IP PBX.

A VoIP phone system can use VoIP to switch phone calls on local lines, between a VoIP user and a landline user, or between two traditional telephone users. IP PBXs can be set up using hardware, or consist entirely of installed software.

Besides on-premise VoIP solutions, there’s another option known as a hosted PBX solution. This is cloud-based and offered up by business VoIP providers. Hosted PBX offers virtually the same features, but doesn’t require complex on-site installation and equipment.

Why Do People Compare PBX and VoIP?

When most people compare VoIP with PBX, they actually want to compare PBX systems like VoIP PBX, IP PBX, hosted PBX with PBX systems like analog PBX, TDM PBX, and proprietary PBX. Next, we will show you their differences and the pros and cons of each type of PBX system.

Landlines generally cost much more than VoIP solutions. Let’s start with the installation. Landline setup is usually charged a certain amount of money, while SIP trunking used in VoIP solutions requires little or no setup cost.

More importantly, since the calls are transmitted over an IP network, monthly service fees and calling rates are much lower for IP PBX users. The cost of internal calls could be reduced to almost none. You can also have a significant amount of expense from International and mobile calls typically.

Many VoIP PBX service providers offer mobile, web-based, or desktop softphones, which can turn your cell phone and computer into an office extension just like a desktop phone. This is very useful for multi-location offices, the remote workforce, on-the-go employees, and field workers. Traditional PBX phone systems are simply unable to support BYOD (Bring Your Own Device) mobility and help users break geographical boundaries. It just can’t adapt to the upward trend of hybrid work.

Traditional PBX generally only comes with limited basic features, and even if some systems can provide more, they usually require a lot of additional fees. IP PBX, on the contrary, offers a range of advanced telephony features like IVR, queue, voicemail, call recording, etc. They can even be license-free, depending on your service provider.

Better yet, VoIP solutions make it possible for you to embrace unified communications. This way, you will be able to enjoy more communication channels and functions, such as video conferencing, instant messaging, presence, CRM integration, etc. This is a major step toward digital transformation for any business.

Related What Is Unified Communications?

Compared to analog PBX phone systems, IP PBX systems are not only more user-friendly but also easier to install, configure and manage. With data and voice delivered on the same network infrastructure, you can not only reduce costs but also save a lot of time in the equipment installation and wiring of physical telephone lines. Some analog PBX phone systems can only be managed via complex commands that are proprietary to each vendor. In contrast, IP PBXs often provide an intuitive web-based management interface that allows IT staff to quickly and easily configure the VoIP system and its many features.

Phones supported by analog PBX systems are usually very limited. Analog PBX phone systems usually require proprietary phones from the same vendor, which means you are locked into that one vendor and unable to use other solutions. A decent IP PBX provider usually offers a highly compatible PBX phone system that allows you to plug and play most mainstream IP phones as well as use analog phones via VoIP gateways. Better yet, they also provide softphones to make web browsers, your mobile phone, and your computer as SIP endpoints.

How To Choose The Right Business Phone System?

When choosing an enterprise phone system, you usually need to consider a variety of factors such as the size of the business, IT staff resources, and your requirements in functionality. Review the following to explore which business VoIP system is the best choice for your company.

As mentioned before, with the phasing out of ISDN and PSTN lines, today’s future-proof business phone systems use mostly VoIP technology, which requires a stable and fast internet connection. This is the very first thing you need to confirm before purchasing any IP PBX. For areas with limited landline or SIP connection, VoIP GSM/3G/4G Gateway could the best alternative for business communications.

Do you have in-house IT staff to manage and maintain the PBX system?

The answer to this question greatly influences your choice between an on-premise IP PBX and a cloud PBX system. If you have technicians with the required expertise and you prefer the maximum control over your business phone system, an on-premise IP PBX is a great choice. However, for small businesses or start-ups lacking in IT resources, it will save you a lot of effort to choose a hosted voice solution and have it is taken care of by your service provider.

Does your company has any significant staffing changes in the near future?

Analog PBX phone systems are usually more costly and cumbersome to add lines and new users while VoIP phone systems are much easier to scale. Particularly, cloud PBX systems are more flexible for companies with staff growth or reduction over the course of the system’s lifespan. The number of extensions may be increased or decreased instantly, and you only need to pay for what you require. It is particularly beneficial for seasonal businesses with fluctuating communication needs or start-ups that are experiencing rapid growth.

Does your business operate in multiple locations?

If so, you may come across this question – “does it matter if I opt for on-premise or cloud-based PBX? While both phone systems can support organizations with multiple locations, they are implemented differently. Cloud PBX makes it easier to connect headquarters, branch offices and dispersed telecommuters under the same phone system. Some on-premise PBX providers also offer a variety of multi-site solutions, such as Yeastar Remote Access Service.

Whether you are looking to have a new phone system installed or have your current system updated, you will find this free ebook below useful. Tips and tools are included.

Inbound Call Center: What It Is, Benefits, How to Choose