Unwanted calls can be a real nuisance, which is inconvenient and annoying at the best of times, especially for the elderly or vulnerable it can be quite frightening. It is a “plague” not only for individuals but also for companies. Mobile phone users can install some blocking Apps to filter and block specific numbers easily, however, for companies, how to protect extensions from this nuisance?

With Blocklist/Allowlist feature, Yeastar S-Series VoIP PBX (on-premises) and Cloud PBX can easily help you get rid of them once and for all. In this blog posts, we’ll give a comprehensive introduction into this feature, about how it works and how to configure the feature on Yeastar PBX.

The blocklist feature of Yeastar PBX functions similarly to call blocker apps on your mobile phone, but there are still some differences.

Call Blocklist on the Yeastar PBX is used to block incoming and/or outgoing calls. If you list a phone number of the incoming call in the blocklist, you will not receive the call from this number any longer. And the caller will hear the following prompt: “The number you have dialed is not in service. Please check the number and try again”. The system will then disconnect the call. Likewise, if you list the phone number of the outgoing call in the blocklist, you can not dial that number any longer.

Nuisance calls are varied and usually attempt to promote a product, service to you, or even defraud you. Categorizing the blocklist call by name will greatly help companies optimize phone management. 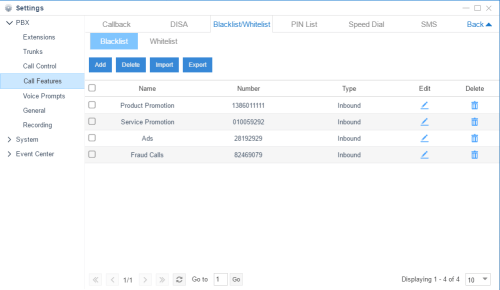 It can be easily found that lots of nuisance calls are of same number segments. In this case, you can use the wildcard matching to flexibly block the phone number with specific segments by setting call blocklist rules.

Note: the wildcard rules are defined by the PBX System by default. 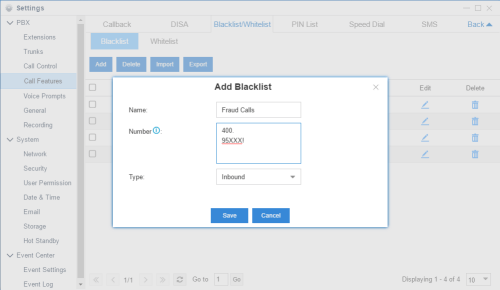 In addition to some unwanted calls, you may also encounter “one ring call”. If your phone rings once, then stop, think very carefully before calling that number back because your phone may face high charges. Such “ring-back” or “ one-ring” scams have long plagued the telecom world. With Yeastar Cloud PBX or S-Series VoIP PBX, you can also prohibit your extensions to make outgoing calls to these numbers to avoid huge losses.

You probably meet a problem that the number segments of your customers’ phone numbers happen to be listed in the blocklist. If so, how to deal with it?

Allowlist feature of Yeastar Cloud PBX and S-Series IP PBX allows you to add trusted incoming/outgoing numbers that have higher priority than the blocklist.

For example, we listed all phone numbers beginning with 400 in the blocklist via the “400.” blocklist rule, however, your customers’ phone number happens to be 4005915259. Simply by adding this number in your allowlist, you can make/receive calls from this number while blocking other numbers started with “400”. 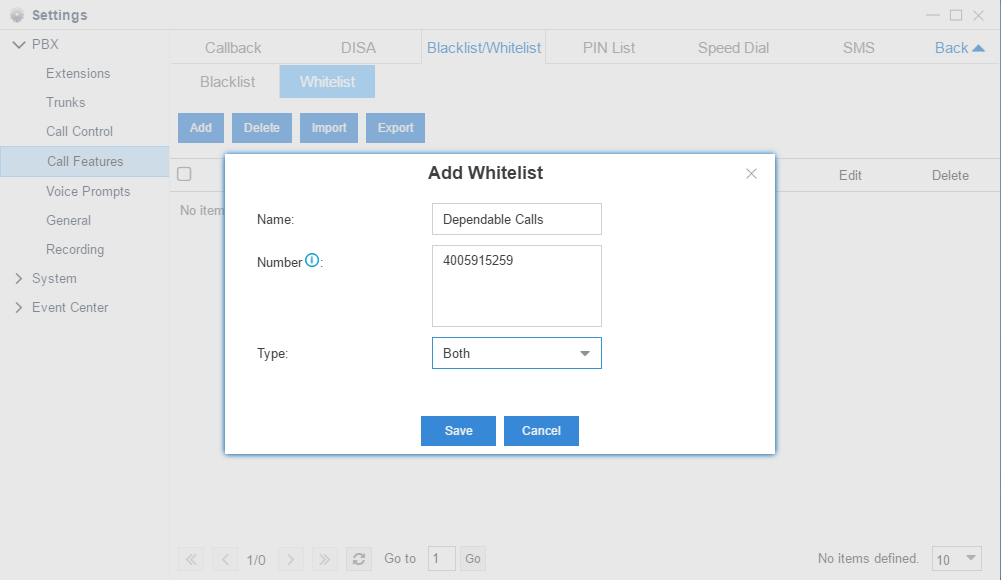 In addition to the blocklist/allowlist feature, Yeastar IP PBX also provides auto call recording feature to automatically save the conversations of the fraud calls. This can provide dependable evidence for tracing the criminals.

You can also gain a comprehensive into Yeastar VoIP PBX features here. We not only list the features but also explain each with uses case, configuration video guides and etc.