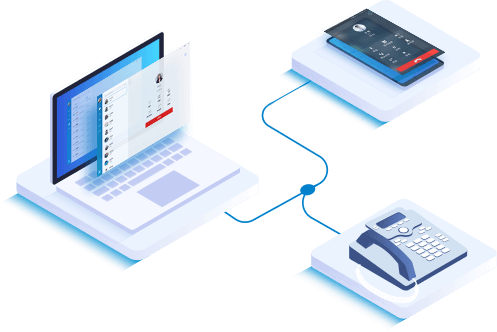 The invention of the telephone has really been a landmark achievement for humanity. In a matter of decades, the ability of remote voice communication has opened up a whole new world of possibilities and spearheaded the further progress of human civilization.

Even though standard landline phone connections are still alive and kicking, more and more people and businesses are switching to VoIP systems to handle their communication needs. It is a simpler, more cost-efficient means of operating phone calls.

The intricacies of VoIP may get a little confusing, which is the last thing you want when thinking about switching your business’s phone systems. This article will help you make an informed decision by clearing up all the uncertainties you may have regarding VoIP and its main features.

What is a VoIP Phone System?

VoIP stands for “Voice over Internet Protocol.” It’s an alternative to analog phone systems. The fundamental difference between the two is the method of signal delivery, which will be covered in more detail later in this article.

One of the most important things to know about VoIP is the way it carries your call over to its other end. Instead of a landline connection, the internet is used to transfer the call over, which increases sound quality, connectivity, as well as limits the amount of wiring and equipment necessary to get your business phone service up and running.

When it comes to differentiating between the various kinds of VoIP phones that are available to you, they can be distinguished between two basic categories: hard phones and softphones.

A hard phone is a physical device that uses a VoIP service as the main way to transmit a phone call. Visually, they don’t differ from the traditional, stationary phones you find at your home or on your work desk. The one fundamental difference is that they are internet-enabled, whether via WiFi or Ethernet.

In layman’s terms, a softphone is basically an application you can install on a device connected to the internet, allowing you to connect to your business network and carry out VoIP calls. The software will enable you to make use of all available VoIP features with just a few taps.

Yeastar provides the Linkus Softphone for both smartphones and personal computers. In addition to all of the features that hard phones have, Linkus lets you establish preset rules for any incoming or outgoing call. For example, you can set a preference for all incoming connections to ring on your Linkus app first and carry over to your IP phone only when you don’t pick it up.

How Do VoIP Phones work?

VoIP phones are not much different from a regular telephone in terms of carrying out a phone call. The fundamental difference is that your analog voice signal is encoded into digital data before being converted back to voice signals at the receiver’s end.

In the case of traditional phone systems, your voice gets transmitted through a landline connection, which is solely dedicated to carrying out telephone calls. To make a business communication network work with a landline phone service, you’ll need a lot of cables and the right wall outlets in order to make sure that each and every phone in the office is appropriately hooked up to the same service provider.

A VoIP service allows you to use your existing internet connection to make and receive calls alongside all of the other data that gets sent via the World Wide Web. As you speak, your voice is compressed into many data packets, also known as protocols, which are then sent to and unpacked by the device on the receiving end of your call. Since all that is needed to transmit the call is a working internet connection, opting for a VoIP service will drastically reduce the time and equipment it would typically take to set up an internal communications network.

What is Needed for a VoIP Phone System?

One of the most common equipment an IP communications network needs is IP phones. They are devices capable of handling internet protocols (the “packages” containing your voice data). All of the features included in VoIP phones are outlined below, but a hard IP phone doesn’t differ much in looks and hardware from a traditional telephone.

Voice over Internet Protocol technology is widely available in the form of mobile apps such as WeChat or Messenger. However, as a business, you will need to use a unified communications platform to keep all of your company’s devices connected, even those used by your remote employees outside of the office.

Yeastar’s cloud-based PBX system is one example of such a platform. It’ll keep all of your firm’s phones’ VoIP data passing through one server, synchronized and out of the sight of third parties.

A standard, hard VoIP phone has all of the features that a standard telephone would have. That includes a headset, dial pad, and line keys. Familiar options, such as hold, call transfers, and quick dial assignments, are all available in your standard IP phone, as well. The most unique aspect of these devices is that they can connect to the internet, either via WiFi, Ethernet, or both. Some hard VoIP phones also come with Bluetooth.

When it comes to softphones, the software they operate on is nearly indistinguishable from your standard messaging app. They’re also equipped with standard telephone options, as well as the added convenience of deciding which device the calls get directed to first.

Another great feature of “VoIPs” is the fact that you can carry your phone number over to a VoIP service seamlessly. Voice over Internet Protocol doesn’t require any special sort of a number, so the whole operation is as easy as transferring your phone number from one provider to another. On top of all that, the calls are completely free of charge, as opposed to landline communications, where there is a certain service provider fee you need to pay in order to make a phone call.

Choosing the Right VoIP Phone for You

Yeastar’s PBX solutions support most of the IP phones that are currently on the market. This means that if you already own an IP phone, you most likely don’t need to spend more money on a different model if you’re thinking of switching to this service.

Hard phones are most useful in day-to-day office situations, such as direct calls between co-workers or large-scale conference calls. Contrary to traditional landline devices, a hard telephone can be connected to a hands-free appliance, such as Bluetooth headsets or speakers.

Softphones are great alternatives to IP phones, especially when your business operates in various geographical locations at once, and not all of your employees are under constant access to the IP network with a telephone capable of making a VoIP call.

To determine how to transfer your business communication network over to VoIP phones, you will need to focus on the scale of your enterprise, how many phones your office requires, as well as the number of remote workers you’re currently employing. All of this is necessary to estimate how many devices you’ll need and the burden all of the VoIP phones will place on your internet connection.

The cloud-based PBX platform Yeastar operates on is compatible with auto-provisioning, which means that the process of configuring all of your connected devices is mostly automatized, leaving you with the task of manual configuration of a single VoIP phone. The rest of the process is simple plug-and-play!

VoIP technology has come to revolutionize business communications in many ways. It allows companies to drastically cut unnecessary costs related to basic operations, thanks to free phone calls via the World Wide Web. Additionally, it has brought UC platforms to all of those who work from home, streamlining business operations even further.

If you’re tired of poor audio quality and clunky phones interrupting conference calls, switching over to a VoIP service may just be the fix your business needed to get back on track, both in terms of saving resources and conveying information in a much easier manner.

What is VoIP? A Full Guide for Understanding VoIP Phone Systems

VoIP App for Business Communications: All You Need to Know

The Benefits of VoIP for Your Business