Nowadays VoIP telephony system is rapidly becoming the standard for business communications worldwide. Some enterprises that are migrating from traditional telephone system to the cost-saving and rich-featured VoIP environment may want to preserve their original investment like analog phones and telephone lines when enjoying the powerful VoIP features. In this case, Yeastar S-Series VoIP PBX and TA FXS VoIP Gateway will give you a favor.

A well-known Chinese paper manufacturer has been expanding its company scale year by year to meet its business development needs. However, as the company scaled up in size, it was hard to connect the extensions from its plants to its traditional telephone system in the headquarter because of the long distance from site to site. The remote communication and cooperation between headquarter and its plants became increasingly costly and inconvenient. To solve this issue, Yeastar distributor recommended the Yeastar S-Series VoIP PBX and TA Analog VoIP Gateway solution to the paper manufacturer. The solution was soon adopted and brought plenty of benefits to the company.

As a large-scale sino-foreign equity joint venture, a well-known Chinese paper manufacturer has implemented the differentiation competitive strategy, focused on their new products and introduced new technologies to achieve new breakthroughs in recent years. In addition, it also invested a lot on building up new product lines and a new large-scale sewage treatment plant.

The expanding of the enterprise indeed laid a solid foundation for its future development, but it also drew higher demands on the communication from site to site at the same time:

Wangbo Internet Communication Technology Co., Ltd. is one of the most important distributors of Yeastar in China. As the local leading large-scale project contractor and system integrator in the city of Dongguan, its customers range from the government sector to the education and the financial industries.

Wangbo company learned that it was unable to expand new extensions in the existing traditional telephone system of this paper manufacturer. What’s more, the newly built workshop and sewage plant were separated to the headquarter by a long distance, which made it hard to deploy the telephone lines. Therefor, they recommend Yeastar S-Series VoIP PBX and TA Analog VoIP Gateway solution to the paper manufacturer and it was soon recognized and adopted. 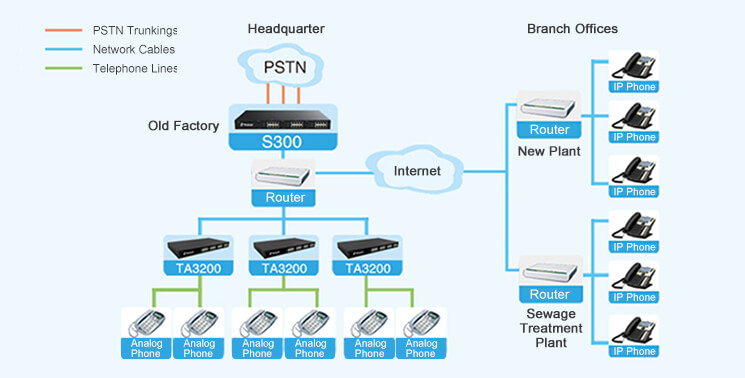